Raid: World War 2 is an action packed game by Starbreeze and Lion Game Lion, evolving around four strong characters forced to work together behind enemy lines, raiding nazi strongholds and creating havoc.
When creating a cinematic trailer for the game, we went for an approach built on suspension rather than action. We were inspired by classic WW2 thrillers and wanted to build the story around the characters and the dynamics within their tight little group. In a story like this, the locations and settings are just as important as the characters. It was great fun to create them, researching neoclassical architecture, art deco design and adding all the details that helped set the stage for a classic suspense heist scene played out during a stormy night deep inside enemy territory. 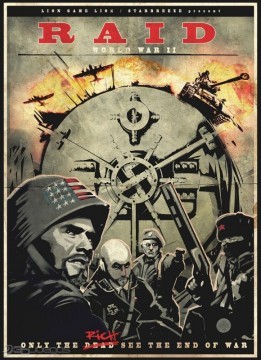